Below the surface: Heat treatment at Custom Castings
November 21, 2018

During solution heat treatment, parts are heated to 1,000°F for up to 12 hours. The length of time that we heat treat a part is determined by its specific thickness and geometry. At this temperature, hardening elements silicon (Si) and magnesium (Mg) dissolve into the aluminum, forming a homogeneous solid solution. Solution heat treatment also breaks the eutectic Si into smaller fragments, changing the shape from plate-like to round. This improves the mechanical properties of castings. After solution heat treatment, parts are immediately quenched in water. The rapid cooling leaves dissolved Si and Mg in the desired composition. A balance must be maintained between fast cooling (to retain most of the hardening elements) and minimizing residual stresses that could lead to warping. The cooling rate is reduced with higher water bath temperatures. Bath temperatures of around 160°F are typically used. The final step is artificial aging, which involves heating parts at around 310°F for up to five hours—or the necessary length of time as dictated by the geometry of the part and the necessary mechanical specifications. Because of the rapid rate of cooling, the dissolved Si and Mg remain in the aluminum structure and are prevented from forming Mg2Si particles during the cooling stage. This controlled precipitation increases the mechanical properties of the castings. The ultimate/tensile strength of a T6 casting is typically 57 per cent higher than as-cast and the yield strength is 120 per cent higher than as-cast. 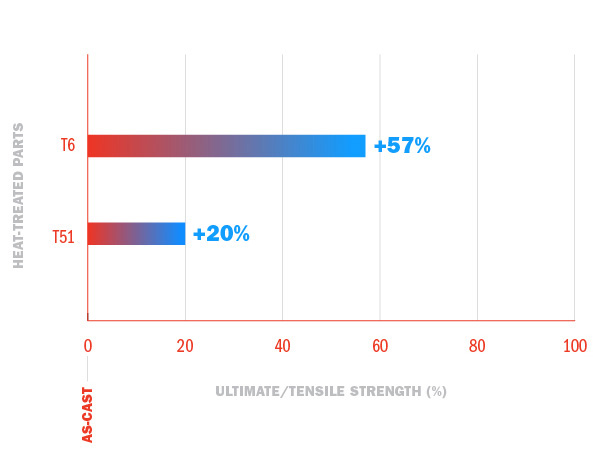 The tensile strength of an aluminum part improves with heat treatment. Heat treating to a T6 temper provides the biggest improvement in strength at 57 per cent.

T6 heat treatment is typically used for parts requiring high strength, like explosion-proof parts or highly-machined parts. T51 heat treatment: Heat treating alloys to T51 is a simpler process, consisting only of the artificial aging step. Parts are put directly into the artificial aging oven at around 440°F for seven to nine hours. The mechanical properties are also improved due to the precipitation of Mg2Si particles. However, the amount of dissolved Si and Mg available for the aging process is lesser compared to the T6 heat treatment. Since the parts are not subjected to rapid cooling, part warping is not a concern. The ultimate/tensile strength of a T51 casting is typically 20 per cent higher than as-cast. We can help in the decision on whether or not T51 is the more appropriate heat treatment for the part. We generally recommend T51 where the part geometry wouldn’t lend itself well to the more aggressive T6 process. Typically this would apply to longer parts with thin wall cross-sections. Get in touch with us for an expert opinion.